The Steady Confidence of Dallas Willard 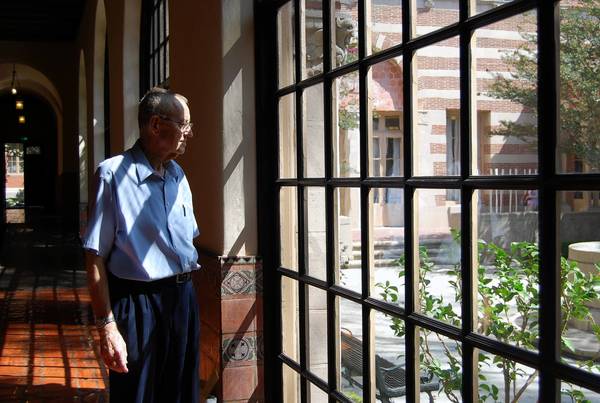 I met Dallas Willard my first year at USC (1995), as a student in his "History of Western Philosophy" class.  I didn’t know anything about him but even the first day I remember being struck by his kindness and gentle presence.  His lectures were more like conversations:  he would make eye contact with us, smile and encourage us to question him, saying, “Anyone speaking so much is bound to make mistakes, so you make sure you stop me.”

The very first thing that struck me, however, was when reading the class syllabus I noticed he didn’t have the title ‘Ph.D.’ next to his name.  It simply said Dallas Willard.  I remember being puzzled by this and thinking, “He can’t teach here without a Ph.D.?  What’s going on?”  A few years later I read in The Divine Conspiracy,

The hunger for titles and public awards in human life--indeed, in  religious life--is quite astonishing... The children of the kingdom...are to have none of all this.  ‘Don’t seek to be called ‘Professor’ or ‘Doctor,’ Jesus says, ‘for you have only one teacher, and all of you are students (189).

I loved how slow and soft-spoken he was because it allowed me to think through the difficult concepts, and thinking back, I’m convinced, this gave him an opportunity to pray for his students and invite God into our midst, even while lecturing.  I was deeply blessed during these lectures as were many others.  He was as brilliant as gentle and caring.

One day,  a Buddhist monk, also a student, asked Dallas if he could teach the class about Buddhism (this was a philosophy of religion class).  Dallas graciously agreed and stepped aside.  I remember there was a lively discussion afterwards.  I can hear Dallas’s words now, “If there were a better way, Jesus would be the first one to encourage us to take it.” What quiet and steady confidence!

By the time I was done at USC (1997), I had dropped my deeply dissatisfying, atheistic view of the world.  I had come to a point where, after desperately seeking God, I could say, “I have finally found Him-- in Dallas Willard.”

Thank you, God, for the gift who was Dallas Willard!

4 Responses to 'The Steady Confidence of Dallas Willard'