Exclusive offer for JPMoreland.com readers! 40% discount on print/ebook of Scientism and Secularism by going to crossway.org/more40 [now extended until 10/31/18!] 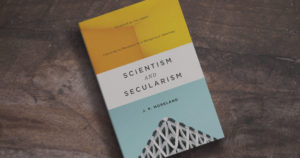 Scientism warrants a shift in how we think about and practice tolerance: it moves us away from a classic model to a contemporary one. According to the classical sense of the principle of tolerance, a person holds that his own moral views are true and are known by him to be such, and those of his opponent are false, but he still respects his opponent as a person and he respects his right to make a case for his views. Thus, someone has a duty to tolerate a different moral view, not in the sense of thinking it is morally correct, but, quite the opposite, in the sense that a person will continue to value and respect one’s opponent, to treat him with dignity, to recognize his right to argue for and propagate his ideas, and so forth.

Strictly speaking, on the classic view, one tolerates persons, not their ideas. In this sense, even though someone disapproves of another’s moral beliefs and practices, he or she will not inappropriately interfere with them. However, it is consistent with this view that a person would judge his opponent’s views to be wrong and would dedicate himself to doing everything morally appropriate to counteract those views, e.g., using argument and persuasion.

Classic tolerance presupposed the reality of moral knowledge. For that reason, it cannot survive in a culture of scientism. And it is scientism that has led to the contemporary view of tolerance. The contemporary version of tolerance, popular in the general culture, goes beyond the classical version in claiming that one should not even judge that other people’s viewpoints are wrong. Thus, the very act of disagreeing morally with someone else is intolerant. Unfortunately, if scientism is correct, there is no moral truth or knowledge and, thus, no real moral disagreements in the first place.

This contemporary version of tolerance is deeply flawed for at least two reasons. First, it cannot be consistently asserted or lived out, because those who affirm it imply that others who do not share their view of tolerance are wrong. In other words, people who follow this new version of tolerance do not tolerate those whom they consider intolerant! Second, it silences the moral protest of evils such as child molestation, racism, and so on. Why? Before one can morally protest something, he or she must judge it to be wrong and not worthy of being tolerated. Such is the culture in which we now live, and we have scientism largely to thank for it.

Download a free excerpt of the Scientism and Secularism! Help support content and leadership that advances the Christian worldview by becoming a regular financial supporter of Eidos Christian Center today!