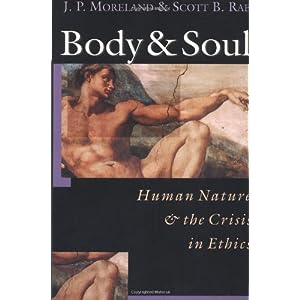 Body & Soul
by J.P. Moreland and Scott B. Rae

The perspective of Body & Soul continues to be relevant to issues in ethics and philosophical-theological anthropology. Some sort of Christian physicalism continues to be growing among Christian scholars today, despite the fact that some sort of substance dualist view of human persons has been, historically, the reigning view among Christians. Philosophical naturalism continues to dominate educational, intellectual, and policy centers of cultural power. Sure, there have been relevant updates in any of these areas since 2000, which my Consciousness and the Existence of God (Routledge, 2008) and the Recalcitrant Imago Dei (SCM Press, 2009) attempt to address. But we continue to need (if not more so than ever) clear Christian thinking at the intersection of ethics and philosophical-theological anthropology.

Co-authoring Body & Soul with my Biola colleague and good friend of twenty-five years, Scott Rae, was empowering and encouraging. Scott is a first-rate thinker in ethics, especially bioethics and medical ethics. I am deeply grateful for the strength of his expertise and experience in those areas. The book was better because of him. We try to show and model that metaphysics and morality are intimately connected and that our dualist view of the body and soul provides the most compelling account of human personhood and its moral dimension. Frankly, due to the mistaken and erroneous nature of the so-called “fact/value” dichotomy, we need way more work to be done at the intersection of metaphysics and morality. We need further Christian philosophical work that helps to show how the morality or ethics of a view comes from being interconnected with its metaphysics, whether we are talking the views of naturalism or postmodernism or some other outlook.

The book is divided into two parts: part one clarifies and defends our version of substance dualism, and in part two, we analyze and argue for crucial ethical positions that follow from the position maintained in part one.

Part one consists of six chapters. In chapter 1, we analyze several different sorts of dualism and locate our version of Thomistic dualism in this taxonomy. We also argue that a proper understanding of spiritual beings presents a view of persons that is inconsistent with physicalism but that is most reasonably associated with Thomistic dualism.  Chapter 2 lays out an appropriate and relevant metaphysical framework for developing an adequate view of human persons and to address various metaphysical issues and concerns. The net result of this chapter is that we try to show how and why it is mistaken to view human persons as property-things instead of as substances.  Chapter 3 clarifies the nature of human persons in strict naturalist and complementarian perspectives. Metaphysically speaking, we show that the Christian complementarian understanding is virtually identical to naturalist depictions of human persons on most of the central metaphysical aspects of human personhood. We close this chapter with a brief presentation of the ethical implications of a Christian complementarian anthropology for certain end-of-life ethical issues, which get further developed in part two.

Chapters 4 and 5 argue that human persons are identical to immaterial substances, namely, to souls. Chapter 6 explains the soul’s relationship to the development and functioning of its body. However, in chapters four and five we limit our investigation of human persons to those considerations that support the claim that human persons are essentially immaterial substances. We direct our attention to three important areas: human agency and freedom (chapter four); the nature of our conscious, mental lives and what this tells us about the types of things we are (chapter five); a set of critical considerations about personal identity (chapter five). Chapter 6 develops a view of the soul’s relationship to the body. It is here that we especially part company with Cartesian dualism and advocate Thomistic dualism as both of those are frequently understood.

Part two of the book takes the metaphysical conclusions and applies them to the complex world of bioethics and biotechnology. Not surprising, many of the most pressing and complicated issues faced by those in academic medicine and by professional bioethicists have a view of personhood at their core. Moreover, those making moral decisions and public policy in bioethics assume a particular view of a human person.

Chapter 7 addresses the ongoing debate over abortion and the equally important, though less publicized, discussion of fetal-tissue research and transplantation. Among other things, given our Thomistic substance view of personal identity, we argue that the use of fetal tissue from induced abortion is morally tainted since the means of obtaining the tissue has a moral dimension, as does the end for which the tissue is used. These are not amoral concerns. Chapter 8 discusses the moral status of extracorporeal embryos, particularly those that are created through in vitro fertilization and kept in storage laboratories. We argue that these embryos are persons with moral status, and as such, they should not be discarded or used for experiments after infertility treatments are complete and, similarly, that they should not be created in the lab for purposes of research.

Chapter 9 considers the “brave new world” of genetic technologies and human cloning. Foundational to this discussion is the view that the essence of a human person can be reduced to or taken as emergent upon his or her genetic content. We take to task genetic reductionism and argue that a person is much more than one’s genetic material. Lastly, we suggest that human cloning does not involve creating souless persons and the concept itself is an oxymoron.

Chapter 10 addresses end-of-life issues, such as euthanasia, physician-assisted suicide and the treatment of patients in a persistent vegetative state. We reject euthanasia. But the more difficult area is the moral status of persons in a vegetate state. We maintain that they are still persons, but that further treatment of them, including medically provided nutrition and hydration, is futile and thus is not a moral obligation.

Endorsements: "Body & Soul is a quality piece of philosophical work. The authors certainly have done their homework, are familiar with the literature and know their way around an argument. . . . I welcome a book that is truly first-rate philosophically and uses arguments with rigor and care." —C. Stephen Evans, professor of philosophy, Calvin College "It is very good to see a version of dualism (constant with Christian tradition) not merely developed and defended but applied to most of the central issues of medical ethics which are pressing today--such as abortion, cloning, use of fetal tissue and physician-assisted suicide. The authors show convincingly how many of their views about medical ethics follow directly from their version of dualism." —Richard Swinburne, professor of philosophy of religion, Oxford University "J.P. Moreland and Scott Rae challenge the conventional wisdom and give a spirited defense of this form of dualism. Their work deserves the attention of every serious student of this topic." —John Jefferson Davis, Professor of Systematic Theology, Gordon-Conwell Theological Seminary "The critical foundational issues underlying every ethical battle is personhood. Without a clear and communicable understanding of that issue, the battle is lost. That is why Body & Soul is to the ethical war what the atomic bomb was to World War II. This book is long overdue and essential reading." —Dave Stevens, M.D., Christian Medical and Dental Society "Moreland and Rae have produced an engaging study in Christian metaphysics. They marry an appreciation of Thomas Aquinas with biblical studies in the service of reexploring bioethical issues from abortion to euthanasia. For better understanding of the deep devisions in our debates on these issues, this volume provides an important key." —H. Tristram Engelhardt Jr., Ph.D., M.D., Professor, Baylor College of Medicine "Here at last is a book with sufficient theoretical thinking to satisfy the scholar as well as enough everyday ethics to satisfy the rest. All biblically based Christians (not to mention others) will not agree with every bioethical conclusion reached here, but all will be challenged and edified by it in many ways. It will be a book to be reckoned with for many years to come." —John F. Kilner, Ph. D., director of The Center for Bioethics and Human Dignity "In a parched philosophical landscape dominated by reductive materialism, Body & Soul by J.P. Moreland and Scott B. Rae is heaven-sent rain. This is the most powerful and persuasive case for substance dualism that I know. But it's much more than that. In addition to its cogent metaphysical psychology, Body & Soul develops--in a unique and impressively rigorous way--the moral implications of the view that the human spirit is irreducibly real. No one interested in the philosophy of mind or in contemporary bioethics can afford to miss this trenchant and timely book." —Ronald K. Tacelli SJ, Boston College "It's about time someone wrote this book. The reality of the soul is not an airy speculation with no importance but in fact that makes a profound difference to every department of human life. Unfortunately, physicalism--the view that the body, but not the soul, is real--has long been gaining ground with hardly a word of protest from Christian thinkers. Some have even taken up the physicalist banner themselves. Not so Moreland and Rae, who demonstrate in Body & Soul that physicalism is philosophically and theologically defective, and unworthy of belief. This impressive treatise is not only a metaphysical tour-de-force but a guide to the most vexing ethical controversies of our time: abortion, fetal research, reproductive and genetic technologies, cloning, euthanasia and assisted suicide. I recommend Body & Soul as an indispensable resource for students, physicians, philosophers, theologians, policy-makers and all who are serious about the great issues of the day." —J. Budziszewski, Depts. Of Government and Philosophy, University of Texas at Austin, author of Written on the Heart: The Case for Natural Law and The Revenge of Conscience: Politics and the Fall of Man "In an age when some educated Christians are selling out the soul for a mess of materialistic pottage, Moreland and Rae's Body & Soul is a significant restatement and cogent defense of the historic Christian teaching about human nature and responsibility. In contrast to typical antidualistic arguments, this book is grounded in the best exegesis of all the relevant biblical material and well-informed by the grand theological tradition before it proceeds to the metaphysics and sciences of human nature. Indeed, its properly ordered, multidisciplinary methodology is a crucial strength of the book. It first elaborates a detailed and philosophically sophisticated body-soul dualism that at the same time emphasizes the unity and functional holism of human existence. It then builds a formidable case that the traditional view of persons as substantial souls is necessary for a robust Christian understanding of moral responsibility and our obligation toward the unborn, the dying, reproductive technology and genetic engineering. Moreland and Rae defend dualism not so much to reassure us about what happens when we die as to guide us in how we should live. I welcome this timely and substantial volume." —John W. Cooper, Professor of Philosophical Theology, Calvin Theological Seminary