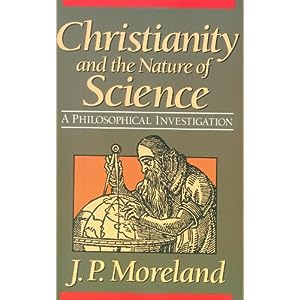 Christianity and the Nature of Science
by J.P. Moreland

One of the most crucial issues facing Christians living in the twenty-first century is how to think about the authority of science as a source of knowledge in relationship to other sources of knowledge, such as philosophy and theology. By implication, how we think about technology is also related to this area. Moreover, it is very important to recognize, perhaps especially for self-identified conservative American Evangelicals, that this topic is much broader than the creation vs. evolution discussion; that discussion, however important, is a microcosm of broader philosophy of science considerations. This book can help Christian leaders appreciate that value.

Concerning the integration of science and theology, I attempt to defend three theses in this book:

Chapter 3 discusses various types of limits to science and argues that scientism is naïve and false. I then define scientific realism and consider various objections to it (chapter 4). Chapter 5 describes a number of antirealist views of science and concludes with a brief sketch of an eclectic model of science that could be used to integrate science and theology. Finally, chapter 6 considers the claim that creation science is not science but religion in disguise. The chapter defends the scientific status of creation science by offering a working characterization of what it is supposed to be and by responding to criticisms of its status as a science.

My colleagues keep pressing me to offer a revised edition of Christianity & the Nature of Science. Perhaps someday I will, but at this time, I am not interested in doing so for at least three main reasons: First, the theses, remarkably, are still mostly clear and relevant to the contemporary discussion and I still affirm them; Second, while there have been important updates to the discussion, if a reader is willing to work a little extra, he or she can discern how those updates might be considered in light of the theses of this book; Third, my current writing interests are less focused on philosophy of science compared to when I wrote this book in the late 1980s. I am grateful for the opportunity to have penned this book when I did. It allowed me to speak with my academic chemistry background in mind, along with my background and work in theology and philosophy.

Tremendous work has progressed at the intersection of science and theology since the writing of my book: various organizations and networks have been formed, academic institutes, associations and societies have produced vast amounts of literature and discussion. But as I also concluded in my “unscientific postscript,” I think these three recommendations still stand:

Related Content: If Christianity & the Nature of Science interests you, you might also want to consider the following:

Endorsements: "I am enthusiastic about this book. I think it presents some important ideas that we, as Christians working in science, need to explore and discuss. The book should be very suitable for a text in a science course for non-science students, and I intend to use it for such a course." --Bernard J. Piersma, Perspectives on Science and Christian Faith "Moreland has undertaken to give Christians a clear-eyed conception of science that does its legitimate authority full justice but is sharply resistant to contemporary tendencies to take that authority as ultimate, global, and autonomous. . . . Christianity and the Nature of Science is a nice piece of work. . . . I can recommend the book very highly." --Del Ratzsch, Calvin Theological Journal