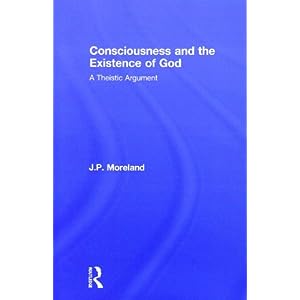 Consciousness and the Existence of God
by J.P. Moreland

Consciousness and the Existence of God is a useful, single volume that reflects a synthesis of my perspective on the “argument from consciousness.” Some of my earlier publications reflect work on this argument (e.g., in my 1987 intermediate text, Scaling the Secular City), and additional works either summarize it even more tightly (e.g., my chapter in the 2009 Blackwell Companion to Natural Theology) or develops it in further ways (e.g., my 2009 book, The Recalcitrant Imago Dei)

Two trends in philosophy and theology provide the rationale for this book. First, there has been an explosion of literature in philosophy of religion, philosophical theology, classic theology and religious studies. An important part of this explosion is a renewed vigor and excellence in discussions of the arguments for and against the existence of God. In the last three decades, philosophers trained in analytic philosophy have applied their craft to these discussions with the result that there is now a rich dialog taking place.  Second, there is an interesting dialectic occurring in philosophy of mind. A large number, perhaps the majority, of philosophical naturalists (e.g., David Papineau, Frank Jackson, the Churchlands) hold that naturalism does not sit well with irreducible sui generis mental properties/events and advocate a (cottage industry of) strong form(s) of physicalism. However, there is a growing dissatisfaction with the various versions of strong physicalism, and more and more are breaking ranks by venturing into emergent property dualism (e.g., the evolution of Jaegwon Kim’s thought in the last ten years), at least for phenomenal consciousness.

Curiously, these two trends—the explosion in philosophy of religion and the growing importance of clarifying the relationship between naturalism and the resurgence of emergent property dualism—are taking place largely in a sort of bibliographical isolation from each other; scholars are not interacting with these trends as they could. However, Consciousness and the Existence of God seeks to remedy this isolation. At the time of publication, to my knowledge, it was the only book-length attempt written from a theistic perspective to examine the issue of whether or not sui generis consciousness provides a significant defeater for naturalism and substantial evidence for theism. I believe that this book has the potential to open new territory of consideration, especially as more philosophers realize the relationship between finite consciousness and broader worldview considerations, including the interface between the two trends mentioned above. I hope to introduce philosophers of religion to issues in philosophy of mind with which they often do not address and to introduce philosophers of mind, especially naturalists, with the way topics in philosophy of religion inform their area of reflection. In that regard, some of this project might be an endeavor in “metaphilosophy”; trying to make sense of broader philosophical factors and consequences across different fields and areas.

In chapter one, I show how naturalist epistemic considerations along with a naturalist etiological account of how things have come-to-be provide constraints on a naturalist ontology. The constraints, along with other considerations, imply that positive naturalism (a form of naturalism that claims superiority over alternative worldviews due to its explanatory power) should be strong naturalism (all particulars, properties, relations and laws are physical). Weak naturalism accepts various forms of emergent entities that I classify. The upshot of chapter one is that the inner logic of naturalism places a severe burden of proof on those naturalists who would embrace (certain kinds of) emergent properties. In chapter two I present three versions of AC, assess the strength of the evidence it supplies for theism, and clarify and defend its major premises. I conclude that the presence of AC as a rival to naturalism places an additional burden of proof on those who opt for weak naturalism.

In chapters three through seven, I analyze and criticize the top representative of rival approaches to explaining the origin of consciousness. Chapters three through five focus on naturalist approaches:  John Searle and contingent correlation (chapter three), Timothy O’Connor and emergent necessitation (chapter four), Colin McGinn and mysterian “naturalism” (chapter five). In chapters six and seven, I consider views that I claim are not plausibly taken to be versions of (positive) naturalism:  David Skrbina and panpsychism (chapter six) and Philip Clayton and pluralistic emergentist monism (chapter seven). I conclude that these approaches fail for various reasons and, in light of the considerations in chapters one and two, AC stands as the most plausible view currently available.

In light of this fact, a naturalist has an additional reason for opting for strong naturalism. Accordingly, he or she may claim that while possible, scientific evidence has made substance or emergent property dualism untenable. While it is not my main purpose to defend property dualism, I do lay out evidence for it in chapter one. Part of that evidence consists in providing some new insights into the Knowledge Argument and into issues surrounding intentionality that favor (at least) property dualism. In chapter eight, I argue that science provides virtually no evidence at all for strong physicalism and, in fact, the central issues at the core of the mind/body problem are philosophical and not scientific. Given that science does not justify physicalism and given that most physicalists claim that science is the main justification for the view, it is important to ask why physicalism is so popular among contemporary philosophers of mind. In chapter nine, I argue that the fear of God—what McGinn calls “the cosmic authority problem”—is the main reason for physicalism’s popularity. I turn this claim into an argument against physicalism and show that it is the relationship between dualism (substance or property) and theism, especially as formulated in AC, which accounts for physicalism’s hegemony.

I dedicated Consciousness and the Existence of God to my colleague and dear friend, William Lane Craig, because of his love for God, his fidelity to truth and his dedication to the defense of the knowledge of God for all peoples.

Related Content: If Consciousness and the Existence of God interests you, you might also want to consider the following: