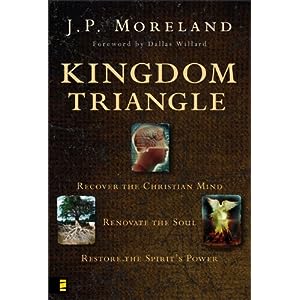 The themes of Kingdom Triangle are deeply integral to my life; they express my deepest passion and hope, and were stirring in my life and ministry for several years prior to publication. For example, you can detect some of this movement in my earlier books like my 1997 book, Love Your God with All Your Mind or my 2006 book, The Lost Virtue of Happiness.

In 2003, for Biola University’s “With All Your Mind” conference, I gave a plenary talk on “The Redemption of Christianity as a Knowledge Tradition.” If I recall, I think that probably was the first time that I so publicly and comprehensively addressed what would become much of the heart of Kingdom Triangle.

For in 2006, I was led to faithfully write what had been ruminating in my heart and mind. More than anything, I wanted to serve others with a Kingdom vision of encouragement for their life in their world. It took me over 40 years of Christian experience, study, and passion for God to recognize and realize the concept of this book.

I want to foment a revolution of Evangelical life, spirituality, thought, and Spirit-led power,” I wrote in the Forward of the book. “My purpose is to mobilize, inspire, envision, and instruct an army of men and women for a revolution on behalf of Christ.

Some of my regular readers know me well for observing and discerning the problematic assumptions of the worldviews of naturalism and postmodernism. In Part One of Kingdom Triangle, I try to succinctly summarize what I take to be the most troublesome aspects of these worldviews in light of how they have helped form a serious crisis in Western cultures; specifically, a crisis of meaning, purpose and well-being. I suggest that the crisis accentuates an age-old problem: Human beings are made for real, dramatic, purpose-filled action and life in the Kingdom of God. But the dominant worldviews of our culture war against that reality.

But hope is not lost. Part Two shows that a way forward from the moral-spiritual and cultural crisis is to recover Christian knowledge, engage in the renovation of our hearts, and restore the Kingdom’s miraculous power. Why these three areas? Well, for one thing, Christian moral and spiritual knowledge is under assault in Western cultures. Why does that matter? It matters because all human life flourishes best when it is environed in, and led by, knowledge, specifically, Christian knowledge about reality.

You see, the Christian knowledge tradition is more than a tradition of religious, doctrinal beliefs. Doctrinal beliefs are an important component when thinking about Christian knowledge and its relevance. Unfortunately, though, many Christians, including many well-intended, Bible-believing Evangelicals think that if you “master” your group’s doctrinal beliefs you have come to know all that really can be known or even should be known about reality when thinking about it Christianly. But that is a regrettable and reductionistic view of the intellectual potential and resourcefulness of Christianity as a knowledge tradition. Instead, Jesus’ vision for discipleship is a vision for how to live, indeed, how to live abundantly when acquainted with knowledge of reality, especially knowledge of the ultimate reality of the Kingdom of God.

Without knowledge, our lives will only end of being led and developed by the fulfillment of our desires and dragged around by the powers and pressures of mere cultural ideas and images. That is part of the “crisis of our age” that I identify in the book. Such knowledge is meant to transform us. Christian moral and spiritual knowledge guides us with direction into how to practice intentional discipleship under the direction of the Spirit with the people of God; hence, the importance of renovating the heart and being empowered by the Holy Spirit.

Perhaps you can begin to see how the three “legs” of the Kingdom Triangle (Christian “Mind,” “Heart” and “Spirit”) are meant to be integrated holistically. The sociology and public expression of our Christian gatherings reveals what happens when one of these necessary features is detached. For example, one can think of churches where “Christian mind” or simply “Christian thinking” are mostly emphasized; they are so emphasized that many just live there, in their minds. But such communities very often don’t produce deep, renovation of the heart. Or, consider churches where there is plentiful emphasis on simply developing appropriate spiritual disciplines, practices or habits, yet not guided by the power of the Spirit or rooted in a tradition of knowledge and wisdom of the inner life. What is Christian spirituality if it is not rooted in knowledge and directed by an experiential interaction with the Spirit? Lastly, consider churches that overly-emphasize the power and presence of the Spirit’s ministries and manifestations now (e.g., spiritual gifts, healing, prophetic words, etc). Very often such churches don’t adequately help to ground in knowledge people’s real experience with God in their ordinary, interaction with Him in light of their inner life being developed into the character of Jesus.  As a result, such churches are unstable and immature.

Now, all of the above observations about our churches are not meant to judge such churches or their leaders. I am merely trying to illustrate what I think is rather obvious when any of the Kingdom Triangle legs are detached or very often overly-emphasized at the expense of other considerations.

Kingdom Triangle is meant to be a clarion call; a manifesto of sorts intended to rally friends of Jesus to live flourishing lives in His world for the fame of His matchless name. Based on direct responses to the book or as a result of when I speak about its topics, I have been deeply encouraged by how this content has influenced leaders, churches, organizations, and educational outlets, far beyond any sort of natural persuasion or effort that I have brought to the equation.

Lastly, if you really want to be acquainted with the heartbeat behind Kingdom Triangle, you can do no better than come and become personally acquainted with the Vineyard Anaheim church (California), which is a fruitful community that regularly forms my identity in Christ as His disciple and ambassador. That place – her people and leaders – were and are deeply in my heart as an image and reality of what shared-life under God can be. However imperfect of a church that it is, it is a healthy church because people know how to square their lives with reality in an honest and humble way.

Related Content: If Kingdom Triangle interests you, you should also consider:

Here's a compelling call for renewing the mind, replenishing the soul, and releasing the Spirit. This is vintage Moreland: passionate, practical, well-reasoned, and ultimately hopeful. It's an important book that must not be ignored."

Lee Strobel, author, The Case for the Real Jesus

J.P. Moreland reveals the hunger in each of us to be part of a grander story and systematically shows how postmodernism and naturalism fail to adequately address this hunger and to offer a coherent way of living.  Moreover, he wisely observes that too often followers of Christ live as postmodernists and naturalists, lacking expectancy of God’s intervention and the knowledge and spiritual formation necessary for true transformation.  A powerful assessment of the Western church and our cultural climate with practical, compassionate insights for the Christian journey.

I profited greatly from reading The Kingdom Triangle.  J. P. Moreland is one of the keenest thinkers of our day; in this book he will challenge you and in the surprise ending perhaps provoke you.  But if so it will lead to a very healthy discussion that is much needed within the evangelical church. A really fine and thoughtful piece of work.

A long-time intellectual leader in the evangelical world, philosopher J.P. Moreland now urges churches to move forward to a fresh appropriation of the supernatural.  While revealing the "thinness" of secularism, Moreland makes a persuasive case that a robust conception of biblical truth not only grounds the intellect, but also opens the door for miraculous healing and personal transformation.

J.P. Moreland has a first class mind and a heart to match. I have watched him enter more deeply into the things of God's Kingdom over the past 4 years.  Kingdom Triangle is an astute analysis of our culture and its mindset and a profound way forward, within it, for the evangelical church.  I highly recommend it.

Lance Pittluck, Senior Pastor of the Vineyard Church of Anaheim

This book is gutsy. As I was reading it, I felt like the proverbial frog in the simmering water getting a wake-up call about my spiritual life. This is a book that is, paradoxically, hard to put down and yet difficult to get through. J. P. points the long, bony finger of truth into the crevices of my mind, heart, and soul. This is a no-holes-barred tome on real spirituality. J. P. lays out an agenda for becoming a holistic Christian, and in so doing, he dons the garb of philosopher, psychologist, and pastor. Passion fills every page. You know that he lives this message! Not everyone will agree with everything that he says, but all will be challenged to think through their views and values. Kingdom Triangle is highly recommended. Strap yourself in and get ready for a great ride!

Center for the Study of New Testament Manuscripts, co-author,

Moreland does an outstanding job challenging the believer to pursue happiness—not in the sense that our 21st century defines it, but rather in the classic sense.  He takes the reader on a journey to pursue a life that is well lived, consisting of virtue and character, and one that manifests wisdom, kindness and goodness.  He maps out strategies for this journey with the ultimate end not being pleasurable satisfaction but instead, one containing a deep sense of well being.

Reviews: 'Preachers need to understand the culture, but even more they need to have tools for leading their people out of the cultural confusion that characterizes our age. J. P. Moreland has provided a powerful guide for pastors....This is an important book for church leaders.' -- Preaching magazine (Preaching magazine )