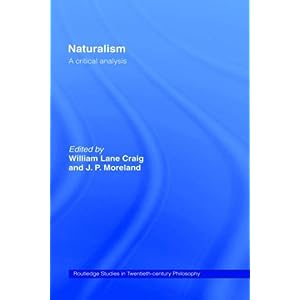 For the last fifteen years, there’s been an interesting pattern in analytic philosophy publishing concerning the fate of philosophical naturalism. For example, since Naturalism: A Critical Analysis was released, in 2002 Jim Beilby edited Naturalism Defeated? essays on Plantinga’s Evolutionary Argument against Naturalism (Cornell) and Mike Rea published World without Design: the ontological consequences of naturalism (Oxford). And then in 2004, Mario De Caro and David MacArthur edited Naturalism in Question (Harvard Press). In 2007, Georg Gasser edited, How Successful is Naturalism (Ontos Verlag), and my 2008 Consciousness and the Existence of God (Routledge) and my 2009 The Recalcitrant Imago Dei (SCM Press) have shown the failure of naturalism in light of the competing hypothesis of the Christian view of human persons. Mario De Caro and David MacArthur have also recently returned in 2010 with their Naturalism and Normativity (Columbia), and Rob Koons and George Bealer have recently edited their 2010 book, The Waning of Materialism (Cambridge).

I mention all these titles to suggest that while not all of these books are critical of philosophical naturalism or offer a wholesale argument against naturalism, they are at least open to questioning some of the core assumptions and significance of naturalism. Also of note is where these books are being published: top-notch academic publishers! Lastly, it’s not accidental that many of the critics of naturalism are also self-identified theists or even Christian theists. What’s been happening in the philosophical trenches seems to also mirror something happening socially and culturally: namely, a “religious turn.” Jurgen Habermas made the following observation in his 2008 book, Between Naturalism and Religion:

All of the contributors in our volume reject naturalism. Accordingly, we have a threefold purpose for the essays that follow. First, the volume contains arguments that, if successful, justify the claim that naturalism fails to deal adequately with a number of desiderata (for example, it fails to provide an adequate account of acts of knowing, and it similarly fails to offer an adequate ground for or analysis of the preconditions necessary for scientific realism). There are four parts and ten chapters in this book. Part one surfaces the epistemological problems that naturalism faces given its ontological contrasts and what counts as knowable. Dallas Willard and Rob Koons’ chapter 2 and 3 detail this area, respectively. Chapter 1 opens with Paul Moser and David Yandell saying, with good reason, “Farewell to philosophical naturalism.” And when you read the rest of the parts in this book, you’ll know why!

Second, we show that to the degree that naturalism is consistent paradigm and its ontology is “located” within the physicalist story, to that same degree it should be a form of global, strong naturalism, as David Papineau and others have correctly seen. It seems that naturalism faces a dilemma: either naturalism involves an epistemic attitude and eitiology that express strong versions of scientism, in which case naturalism suffers from some obvious defects (no account of proper functioning, denial of consciousness, for example), or else it must weaken its ontology to adopt certain entities (abstract objects, mental properties), in which case it loses the unity of science and its right to claim a strong naturalistic epistemic attitude, explanatory hegemony, and an adequate etiological account of the coming-to-be of everything. This dilemma is part of the widely discussed explanatory gap or “location problem” for certain entities in the naturalist ontology.

Part two and three evidence this second purpose with particular precision. For example, my chapter 4 considers the fate of the ontological status of properties if naturalism is true and Mike Rea’s chapter 5 extends this discussion to the problem for material objects given the naturalist view of things. Charles Taliaferro’s chapter 6 addresses the problem of mind and consciousness in light of eliminative materialism, identity materialism, nonreductive materialism and the prospects for an “integrative dualism.” Stew Goetz’s chapter 7 argues that libertarian freedom is incompatible with the truth of naturalism because it implies the truth of dualism.

Now concerning the third purpose, we provide a sampling of contemporary work in the burgeoning field of philosophy of religion which is pertinent to the debate over naturalism, however much it has tended to be overlooked. A renaissance in analytic philosophy of religion has been underway for at least forty years now due in part to the demise of positivism in the 1950s and 1960s and the stellar work that philosophers of religion began to produce at that time, including Alvin Plantinga, the late William Alston, Richard Swinburne, and several others. We include in the present volume articles which advert to evidentiary considerations in the natural world itself, for example, contemporary Big Bang cosmology, indications of intelligent design discernable in the bio-world, and the apprehension of value through moral experience, which serve, as it were, as “signposts of transcendence” pointing beyond the natural world to its transcendent ground. All of this has been part of the attempt to falsify philosophical naturalism.

Contemporary analytic natural theology is a fairly “hot” development in the literature, compared to developments in this area fifty years ago. Recognizing this trend, Bill Craig and I also edited the 2009 Blackwell Companion to Natural Theology. John Hare’s chapter 8 (and part three of the book) shows that there is an incoherence involved in accepting both naturalism and the moral-gap picture of morality and, frankly, we need moral knowledge and belief if we to sustain moral lives through the experience of evil. I would add that if a naturalist can’t give us such knowledge and faith, why should we be led by them? Bill Craig and Bill Dembski hammer out some important chapters, 9 and 10 (part four), respectively, concerning naturalism’s problem to account for a “first cause” and to detect design in the universe. Dembski attempts to show that on scientific grounds, naturalism can be seen to be false. And if it can’t adequately account for how the universe began, why trust it as a basis for knowledge about cosmological origins.

Editing this volume with my friend and colleague, Bill Craig, was an honor. We are so pleased to have it be part of the Routledge Studies in Twentieth-Century Philosophy. Having such a stellar cast of our colleagues and friends for this volume completed our joy.

Related content: If Naturalism: A Critical Analysis interests you, you might also want to consider the following:

Endorsements: 'This book provides a good introduction to work by some contemporary American theistic philosophers of religion. Moreover, it gives clear expression to the recent resurgence in polemical Christian philosophy of religion in American academic philosophy' -Australian Journal of Philosophy