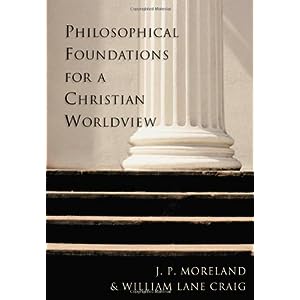 It was delightful to co-author this award-winning book (2004 ECPA Gold Medallion Award and Award of Excellence in the 2003 Chicago Book Clinic) with my friend and Biola colleague, William Lane Craig. I think we played to the strengths of the other in some important ways in this book, and it was deeply satisfying to have our co-laboring for the Kingdom finally co-exist in this way in a single volume … a hernia-inducing, 600+ page volume, I might add!

It would be easy to pigeonhole Philosophical Foundations for a Christian Worldview as just a text for Christian philosophy students and instructors. Granted, many of the readers are of that interest. But we’ve found that pastors, apologists and evangelists are also benefiting from it, especially as a reference source. Moreover, the book has been used by Christian scholars in theology, the sciences, and education. Thoughtful Christian readers should try to attend to as much of the philosophical assumptions of their worldview as they can. Some might also be interested in my co-authored book with Biola colleague, Garry DeWeese, titled, Philosophy Made Slightly Less Difficult (IVP, 2005).

Philosophy, we contend, aids Christians in the tasks of apologetics, polemics and systematic theology. It reflects our having been made in the image of God, helps to extend a biblical perspective into areas not expressly addressed in Scripture, facilitates the spiritual discipline of study, enhances the boldness and self-image of the Christian community, and it is requisite to the essential task of integrating “faith and learning.”

My book with Bill Craig is more than just an introduction to philosophy. It is an introductory text from a Christian point of view. Our text is intentionally Christian and therefore aims to offer not merely a soporific review of positions pro and con, but rather an articulation of what we take to be the most plausible stance a Christian can take on various questions.

Each chapter includes an exposition of the most important questions raised by the issue under discussion, along with a Christian perspective on the problem, and closes with a condensed summary of the chapter and a list of key terms employed in that chapter. A list of suggested further reading for each chapter is included at the back of the book.

We chose to dedicate Philosophical Foundations for a Christian Worldview to each of our mentors: for me, Dallas Willard; for Bill, Stuart C. Hackett.

Related Content: If Philosophical Foundations For A Christian Worldview interests you, you might also want to consider the following:

Table of Contents: Outline of the Book An Invitation to Christian Philosophy Part 1: Introduction 1. What is Philosophy? 2. Argumentation and Logic Part 2: Epistemology 3. Knowledge and Rationality 4.The Problem of Skepticism 5. The Structure of Justification 6. Theories of Truth and Postmodernism 7. Religious Epistemology Part 3: Metaphysics 8. What Is Metaphysics? 9. General Ontology: Existence, Identity and Reductionism 10. General Ontology: Two Catagories--Property and Substance 11. The Mind-Body Problem: Dualism 12. The Mind-Body Problem: Alternatives to Dualism 13. Freewill and Determinism 14. Personal Identity and Life After Death Part 4: Philosophy of Science 15. Scientific Methodology 16. The Realism-Antirealism Debate 17. Philosophy and the Integration of Science and Theology 18. Philosophy of Space and Time Part 5: Ethics 19. Ethics, Morality and Metaethics 20. Ethical Relativism and Absolutism 21. Normative Ethical Theories: Egoism and Utilitarianism 22. Normative Ethical Theories: Deontological and Virtue Ethics Part 6: Philosophy of Religion and Philosophical Theology 23. The Existence of God (I) 24. The Existence of God (II) 25. The Coherence of Theism (I) 26. The Coherence of Theism (II) 27. The Problem of Evil 28. Creation, Providence and Miracle 29. Christian Doctrines (I): The Trinity 30. Christian Doctrines (II): The Incarnation 31. Christian Doctrines (III): Christian Particularism Suggestions for Further Reading Name Index Subject Index Scripture Index

Endorsements: Moreland and Craig present a comprehensive introduction to philosophy from a Christian point of view. Both theologically and philosophically engaging and stimulating. Moreover, the book is structured in such a way that prior knowledge in philosophy is not necessarily required to understand it. I highly recommend it. —Celucien L. Joseph, Christ, My Righteousness, August 1, 2008