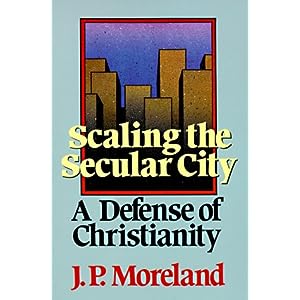 Scaling The Secular City has undergone at least a dozen printings since it was originally released. Academic Christian apologetics, philosophy of religion, and philosophical theology, and New Testament studies have flourished to no end since the 1980s. Within my own corpus of writing, Scaling the Secular City – like Love Your God with All Your Mind (1997), and Kingdom Triangle (2007) – seems to have marked something of a transitional phase in my bibliography; for from it, one can detect how several of my other books have emerged (for example, one case in point, Consciousness and the Existence of God [2008] and The Recalcitrant Imago Dei [2009] are significant developments of the “argument from mind”).

At the time of this book’s writing, four thinkers were especially significant to my perspective and argumentation: Josh McDowell, who was the first to introduce me to the joy and importance of apologetics; Norm Geisler was a constant source of encouragement and a role model in the area of apologetics; William Lane Craig significantly influenced my thinking on a variety of areas; and my dear friend and philosophical mentor, Dallas Willard, was indispensable – his gracious spirit and tenacious mind were no less than inspiring.

The book is divided into eight chapters, moving from mere philosophical theism to basically “mere Christianity.” In chapters 1-4, several arguments are offered for the existence of a personal God. Chapter 1 describes the Kalam cosmological argument (along with support for that argument with scientific and philosophical lines of reasoning and considers objections). Chapter 2 centers on issues which cluster around the design argument. Several types of design are discussed, three forms of the argument are presented, and objections are considered. Chapter 3 attempts to argue for God from the existence of finite minds by first establishing that substance dualism is a defensible solution to the mind-body problem and, second, by arguing that minds to not come into existence from nothing or emerge from matter. Chapter 4 argues that the existence of God is the best solution to the question of the meaning of life.

Chapters 5-6 present a case for the deity and resurrection of Jesus of Nazareth. Chapter 5 offers five general lines of evidence for the claim that the New Testament documents are reliable historical sources about Jesus. Chapter 6 examines the evidence for the empty tomb, the resurrection appearances, and four important features of the early church. The chapter closes with a brief examination of the role of Hellenistic influences on the New Testament picture of the resurrection of Jesus.

Chapters 7-8 focus on objections raised against Christian theism. In chapter 7 the relationship between science and Christianity is analyzed. The realism/antirealism debate is surveyed, limits to science are discussed, five models for integration between science and theology are presented, and the main philosophical, theological, and scientific issues in the creation/evolution debate are described. Chapter 8 concludes the book by analyzing four key issues: the visibility of God, the charge that belief in God is a psychological projection, the value of religious experience, and the nature of five different forms of ethical relativism.

I tried to write an intermediate-level work that is aimed at those who want a serious discussion of apologetics issues without having formal training in philosophy. At the time I wrote it, there were very popular level apologetics books available (e.g., some of McDowell’s works), and some very technical ones (e.g., Richard Swinburne’s The Existence of God).  I sought to write a book that was between these with a leaning towards the more technical end.  The Conclusion contains a summary of the arguments offered in each chapter. Moreover, each chapter is intentionally self-contained, and someone could be encouraged to read a particular chapter in light of his or her specific questions and needs.

Related Content: If Scaling the Secular City interests you, you might also want to consider the following:

Table of Contents: Foreward Acknowledgments Introduction 1. The cosmological argument 2. The design argument 3. God and the arument from mind 4. God and the meaning of life 5. The historicity of the New Testament 6. The resurrection of Jesus. 7. Science and Christianity 8. Four Final Issues Conclusion Index

Endorsements: "No evangelical now writing on apologetics surpasses Moreland in philosophical ability. Every person who intends to speak for Christ to the contemporary mind should master the content and spirit of this book." --Dallas Willard, University of Southern California