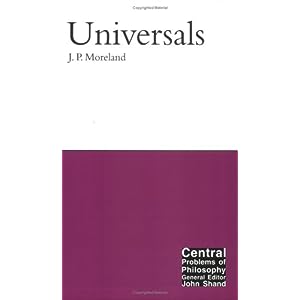 This book is a study in analytic ontology with a focus on issues and options at the core of the “problem of universals.” I treat this problem as really a cluster of related issues central to debates among extreme nominalists, moderate nominalists, and advocates of various forms of realism about the ontological status of properties.

Universals is intended to be an introductory text in the sense that it focuses on what I understand to be the most important issues central to the subject matter. I regularly use it as one of my main required texts for my Metaphysics 1 class at Talbot School of Theology; for example, it can compliment E.J. Lowe’s 2002 book, A Survey of Metaphysics or Michael Loux’s 1998 book, Metaphysics: A Contemporary Introduction. I am happy to have my work associated with the Central Problems of Philosophy series with McGill-Queen’s University Press.

In many ways, Universals is a continuation of my 1985 Universals, Qualities, and Quality-Instances. For one thing, the books are approximately 70% different in scope and coverage. But a common thread, though, is the defense of metaphysical realism, especially compared to moderate and extreme nominalism. 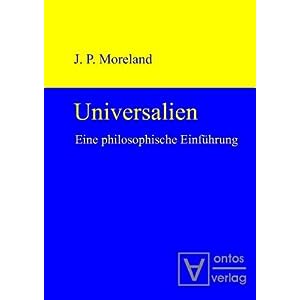 Chapter 1 describe three main schools of thought regarding the ontological status of properties (with subgroups within each school):  “Extreme nominalism” (properties are given a reductive analysis in terms of this biconditional:  x has F if and only if Q, where Q is filled out differently by, e.g., class, predicate, concept, resemblance extreme nominalism) held by philosophers such as W. V. O. Quine and W. Sellars.  “Nominalism” (properties are abstract particulars or tropes) held by G. F. Stout, D. C. Williams, and Keith Campbell.  “Realism” (properties are multiply-exemplifiable entities) held by D. M. Armstrong, Nicholas Wolterstorff, Reinhardt Grossmann, Michael Loux.  I offer a brief characterization of some of the main sub-groups within each school of thought.

Chapter 2 describes four main versions of extreme nominalism (class, predicate, concept, resemblance) and offers an evaluation of the main arguments for and against extreme nominalism in general and each view in particular.  Specific attention is given to the features of predication and membership in natural classes, exact similarity, and abstract reference.  The chapter concludes that extreme nominalism suffers from serious problems, e.g., those associated with imperfect community and companionship difficulties.  The views of Quine and Sellars are central to the chapter.

Chapter 3 offers a brief description of nominalism (properties are abstract particulars).  The key issue for nominalism is that property-instances construed as abstract particulars must be simples.  Next, the nominalism of G. F. Stout is surveyed briefly in order to show why is it is not the most adequate nominalist analysis of properties.  The rest of the chapter analyzes and critique the most mature version of nominalist to date as of publication, that of Keith Campbell.  I distinguish an early and late doctrine of tropes in Campbell, and evaluate his main arguments for trope nominalism.  I conclude that nominalism suffers from serious problems.  This chapter is a unique contribution to the literature in comparison to other philosophers dealing with the ontological status of properties.

Chapter four marks a pivot in the book.  Now the focus is on alternate versions of realism. But first I claim that the central commitment of realism is not that properties are abstract objects, but that they are multiply-exemplifiable entities “in” their instances.  I support this claim by doing two things:  1) describing and rejecting one reading of Plato according to which properties are perfect particulars and exemplification is a model/copy relation; 2) showing why a nominalist analysis of property-instances (tropes) must treat them as simples and why a realist analysis treats property-instances as complex wholes with three constituents:  the universal, the nexus of exemplification, and an individuator.  I then describe Nicholas Wolterstorff’s version of realism (properties are kinds) and subject it to criticism.  I claim that it is actually a version of nominalism that eschews extensionalist sets in favor on non-extensionalist kinds.  Next, I analyze the realism of D. M. Armstrong and evaluate it’s strengths and weaknesses.  I conclude that Armstrong’s views have much to offer but that his rejection of the axiom of localization (no entity can be wholly in more than one place at the same time) is problematic.

Chapter five describes and defends a traditional view of properties and property-instances.  On this view, properties are abstract objects in the metaphysical and not epistemological sense.  In this century, the traditional view has been defended by E. B. Allaire, Reinhardt Grossmann, and Gustav Bergmann.  I consider and respond to a number of arguments against traditional realism (e.g., problems with “perceiving” universals, certain regress arguments).  Next, I develop a traditional realist analysis of predication and present four advantages to this analysis compared to it’s chief rivals. I evaluate and reject the claim that Edmund Husserl’s doctrine of moments is a nominalist one.  A lesson is drawn from that analysis: just because a philosopher is committed to the existence of property-instances, that does not make him/her a nominalist.

Chapter six explores further issues that arise in conjunction with a traditional realist view of properties and to show the philosophical work the classic view can do. There are two sections to this chapter. The first section contains an examination of three arguments against realism and the second presents two issues that are part of a developed realist ontology, i.e., the existence of uninstantiated universals and the relationship between properties and existence.

I chose to focus this book on subjects that I understand to be of perennial importance to the study of universals rather than merely surveying the relevant literature on the matter. Consequently, I tried to offer an accessible and authoritative “introduction” to analytic ontology that would be helpful to student and scholar alike.

Endorsements: "A comprehensive treatment of the problem of universals from both an historical and present-day perspective, surveying all of the leading approaches and portraying their strengths and weaknesses in an even-handed way. Exposition and arguments are clear and succinct. A worthy contribution to the literature in its topic." E.J. Lowe, Department of Philosophy, University of Durham

One Response to 'Universals'